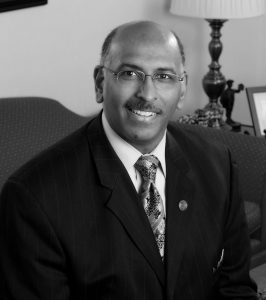 Michael is a history-making elected official and national leader whose counsel and advice is sought by those navigating at the highest levels of government, international affairs, media and business. When elected Lt. Governor of Maryland in 2003, he made history as the first African American elected to statewide office; and again with his subsequent chairmanship of the Republican National Committee in 2009.

As chairman of the RNC, Michael was charged with revitalizing the Republican Party. A self-described “Lincoln Republican,” under Steele’s leadership the RNC broke fundraising records (over $198 million raised during the 2010 Congressional cycle) and Republicans won 63 House seats, the biggest pickup since 1938. His commitment to grassroots organization and party building at the state and local levels produced 12 governorships and the greatest share of state legislative seats since 1928 (over 600 seats).

As Lt. Governor of Maryland, Michael’s priorities included reforming the state’s Minority Business Enterprise program, improving the quality of Maryland’s public education system (he championed the State’s historic Charter School law), expanding economic development in the state and fostering cooperation between government and faith-based organizations to help those in need.

Prior to his public service, Michael served as in-house finance counsel to the Mills Corporation (1997-1998) and as a corporate securities associate in the D.C. office of Cleary Gottlieb Steen & Hamilton LLP (1991-1997). In 1999, he formed The Steele Group, Inc. a business and legal communication and consulting firm.

From 2007-2008, Michael was a partner in the Washington, DC office of Dewey & LeBoeuf LLP, where he focused on corporate securities, government relations, and international affairs, with an emphasis on Africa. In 2012, Michael joined with former White House Counsel Lanny Davis in founding the crisis management and strategic communications firm Purple Nation Solutions (PNS). PNS was absorbed by Levick in 2014.

Michael’s ability as a communicator and commentator has been showcased through his current role as a political analyst for MSNBC. He has appeared on Meet the Press, Face the Nation, HBO’s Real Time with Bill Maher, Comedy Central’s The Colbert Report and The Daily Show. In addition to his work in television, Mr. Steele can be heard each week on his radio program, Steele & Ungar on the POTUS Channel on SiriusXM.

Michael’s writings on law, business and politics have appeared in The Wall Street Journal, The Washington Times, and on websites such as MSNBC.com, The Grio.com, The Root.com, BET.com, Politico.com, Townhall.com, and in scholarly journals such as The Journal of International Security Affairs and Catholic University Law Review, among others.

Born at Andrews Air Force Base in Prince George’s County, Maryland, Michael was raised in Washington, DC. Upon graduating Johns Hopkins University (‘81’), he entered the Order of St. Augustine where studied for the priesthood. He is a graduate of Georgetown Law Center (’91), an Aspen Institute Rodel Fellow in Public Leadership and a University of Chicago Institute of Politics Fellow.